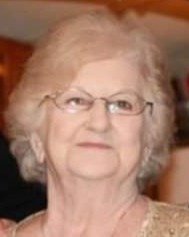 Patricia Kanable, 82, of Owensboro, passed away November 17, 2022, while under the care of Hospice of Western Kentucky. She was born April 7, 1940, in Owensboro, to the late James C. May and Mildred Mae Bennett. Patricia could be described as spunky, and devoted to her church, her children, and her grandchildren. She had a big, generous heart and will be missed by everyone who knew her.

Patricia was preceded in death by her husband of 25 years, Maurice Kanable; her children, Krissy Howard and Mike Howard; her son-in-law, Joe Cardwell; and her daughter-in-law, Nellie Howard.

The funeral Mass will be 10am Tuesday at Sts. Joseph and Paul Catholic Church. Burial will be in Resurrection Cemetery. Visitation will be from 4pm until 7pm Monday, with prayers at 6:30, at Glenn Funeral Home and Crematory, and from 9am until 10am Tuesday at the church.

Memories and messages of condolence for the family of Patricia Kanable may be offered online at www.glenncares.com.