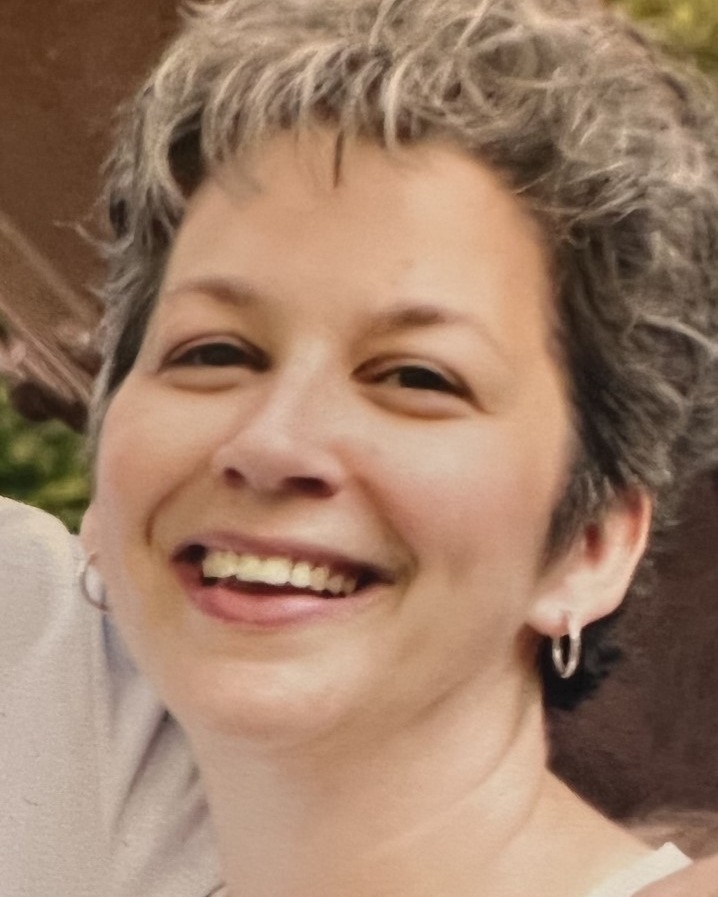 Mrs. Jane Page Acquisto Agisilaou, of Owensboro, died at her home on Saturday, October 8, at the age of 59, after a long illness, surrounded by her husband and four adult children, who knew she hung the moon.

She is survived by her adoring husband of 39 years, Harris; their children, Maria, Andrianna, Christakis and Nikos; her devoted mother, Patti Acquisto; four brothers, Jim, John, Joe and Jason; and her four grandsons, Tate Jerome, Lincoln, Shepherd, and Tahj.

Jane was born on September 14, 1963, to Patti Gwenn and Jerome “Jay” Acquisto – the second-youngest of five, the only daughter in a sea of boys.

Jane grew up at the corner of Daviess Street and East 25th Street. She graduated from Owensboro High School. Wanting to stay close to home, she attended Kentucky Wesleyan College, where, one day in the library, she met Harris – a handsome Greek Cypriot and local soccer star.

In 1992, Jane and Harris, with two kids and one on the way, bought the house where they would raise their children, on 23rd Street, two blocks from where Jane grew up. Jane gave birth to Maria in 1987, and every two years for the next six years, she gave birth to another child.

Jane’s true calling in life was being a mother, and she was good at it. When she was wrangling four little ones, she somehow found time to sew dozens of outfits and hair bows.

Despite being self-taught, she was good. Word got around, and soon she was outfitting not only her children, but her niece and nephews, and friends’ children. Later, when her children were older and playing sports, she sewed hairbows for Anna’s whole OHS cheerleading squad. After sending Harris to Kroger to buy all the Koolaid he could find, she made and sold $3,000-worth of purses made entirely out of the juice pouches to help send her boys’ soccer team to Brazil. Jane could’ve probably made a living off the Sadie Hawkins’ shirts she sewed for high school girls in the early 2000s.

Jane was a hustler. She was not only crafty, but she paid close attention to detail. This, paired with her love of taking pictures of her children and family, made her a great scrapbooker. At her sons’ soccer games, she often didn’t cheer from the stands but stood behind the goal, taking pictures.

Eventually, she helped other people pursue this hobby and opened a scrapbooking store with two close friends in downtown Owensboro, called Memories on Main.

Jane was vibrant, and she could laugh herself into a fit, shrieking, crying, sometimes collapsing on the floor. Her laugh was infectious. Everyone who knew her knew she had a deep and abiding love for her family.

Jane was jokingly called a savant by people close to her because of her impeccable, sometimes uncanny memory. She was sharp-witted and smart.

She never graduated from KWC, but as an adult and full-time mom of four, after Harris earned his second Master’s, she went back to get her Associate’s Degree from Owensboro Community College. Despite running kids to school and then soccer practices – sometimes telling her husband it felt like she spent more time inside the car than outside – and working as director of the Buena Vista Christian Learning Center, she earned a 4.0 from OCC. She took her job as director seriously, and Ms. Jane loved her daycare children almost as much as her own.

Jane was a loyal member of Buena Vista Baptist Church since she was 9 years old. She raised her kids there and watched them all get baptized, as well as as her oldest grandchild.

Miraculously, Jane somehow found time to cook a meal every night for her children.

Memories and messages of condolence for the family of Jane Agisilaou may be offered online at www.glenncares.com.