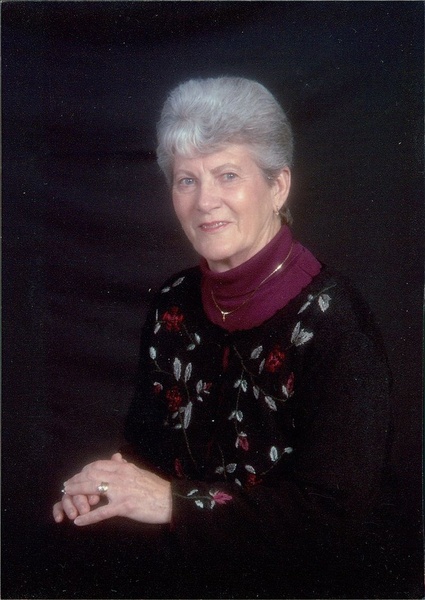 Helen Rose Krampe Smith of Owensboro died on Sunday, October 3rd, at home, surrounded by family. She was born December 14th, 1934 to Leo B. Krampe and Rose Mary Krampe of Rome, KY. She graduated from Owensboro Catholic High School with the class of 1953. She later worked at KenRad for several years before and after marriage.

She and Norbert Smith were married at St. Martin Catholic Church at Rome on January 4th, 1958, by Father Joseph Saffer. Their union began after a short courtship beginning the last week of August 1957 and lasted for over 63 years. They were members of St. Anthony Catholic Church at Browns Valley, and since January 2020, they have also been members of Blessed Mother Catholic Church. She was diagnosed in August 2018 with an incurable brain disease which included periods of dementia. When not in dementia, she had an absolutely faultless memory of her life, and always showed her love to family and friends despite the misery she had to endure.

She was preceded in death by her parents; her brothers, Robert and Edward; sisters, Margaret Stewart and Edna Fulkerson; and her beloved mother-in-law, Mary Rose Smith.


While growing up, she helped her father and older brothers with farm work where she learned to drive a John Deere Model B tractor with a hand clutch. As a result of farm work, she never learned how to cook, which she tearfully admitted to Norbert a few days before their wedding. Nevertheless, while caring for all the babies, she became an excellent cook, with many yellow squash casseroles, hundreds of loaves of pumpkin bread, and hundreds of jars of green beans.

She was an excellent seamstress, making anything from kids training pants to dress clothes. She also crocheted at least a hundred afghans, and about that many baby blankets. A lot of these items were made while traveling, mostly between Utica and Murray, KY. while our children were enrolled at MSU. Four of the eight did acquire at least six degrees among them, and one became an RN thru the Kentucky Wesleyan nursing program.


As the kids grew up, she helped with family farm work, passing onto them her earlier experience. She drove farm trucks hauling grain to market. But she would never mow the lawn. She always said if Norbert didn't do windows, she would not mow the lawn. She enjoyed spending many hours working in her flower beds, with many varieties, roses especially. Rosie worked during elections for several years as the Democratic Sheriff for the Utica precinct. She worked part time for more than eight years at the A&W store in the mall, was treasurer of the Daviess County NFO for several years and worked for eleven years as a tobacco marketing recorder for the Department of Agriculture. Any job she ever had was done with accuracy and neatness.

From the beginning of the marriage, she worked many church activities at St. Anthony's: bereavement dinners, bingo, fundraising dinners, and anything that may be needed. She was on the building committee for the new rectory in 1990 and 1991. She taught our kids how to get involved in parish activities as they grew up, and to help with farm work. She never spoke harshly of anyone, no matter how deserving of it they may have been. Rosie was one of the most beautiful women, body and soul, who God ever created, and is now with Him and her loved ones in heaven. Rosie and Norbert received the Sophia Award for St. Anthony Parish in 2002.

The funeral Mass will be at 11:00 AM, Friday, October 8 at St. Anthony Catholic Church. Father Mike Clark and Father Mark Buckner will officiate. Visitation will be Thursday from 3:00 until 7:00 PM, with prayers at 6:00 PM, at Glenn Funeral Home and Crematory and Friday from 9:00 AM until 11:00 AM at St. Anthony Catholic Church. Burial will be in the church cemetery just a few feet away from her good friend, Father Henry O'Bryan.

Memories and condolences may be offered online at www.glenncares.com