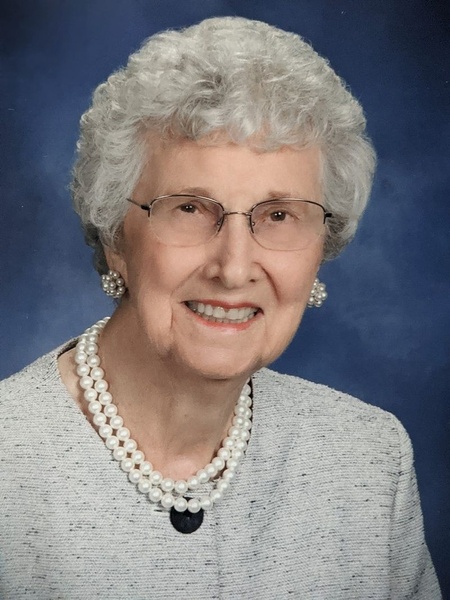 Euleen Rector Rickard, age 98, died Sunday, August 22, 2021. She enjoyed a long and fruitful life and was a loving wife, mother, grandmother, and great-grandmother. She was born October 26, 1922, in Island, Kentucky to the late Mary Lee Blades and Oscar Nathaniel Rector.

On January 3, 1942, she married her high school sweetheart, Alvin Walton Rickard of Sacramento, Kentucky, and followed him on his World War II assignments, living in several western states. After the war, they lived in Island, then Sacramento, and finally moved to Owensboro in 1954 where they reared their children.
She and her husband of 65 years loved to travel and had been to all 50 states and 27 countries. She was an excellent seamstress, quilter, an avid reader, and a member of First Baptist Church of Owensboro.

With her love of McLean County and an early interest in genealogy, she joined the group that in 2000 founded the McLean County History Museum and Regional Family Research Center. She served as its first curator and, for ten years, wrote a weekly history column for the McLean County News.

Along with her parents and her husband, she was also preceded in death by a sister-in-law, Norma Rickard Bowman (Gates).

A graveside service for Euleen will be held Saturday, September 4, at 11:00 am at Free Union Cemetery in Sacramento, Kentucky, officiated by First Baptist Church Pastor, Dr. Paul Strahan.

Expressions of sympathy may take the form of contributions to the McLean County Museum and Regional Family Research Center, P.O. Box 291, Calhoun, Kentucky 42327.

Memories and condolences for the family of Euleen Rickard may be left at www.glenncares.com