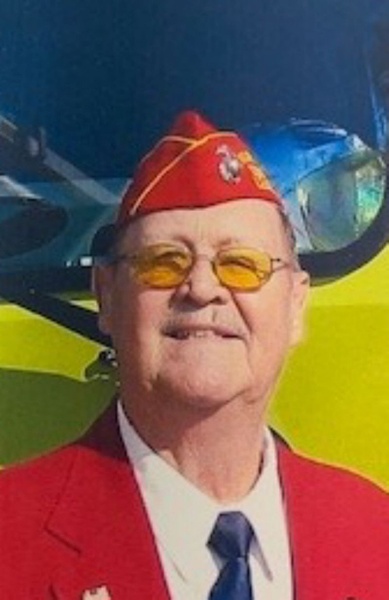 Ernest Chacey Adams, 93, of Owensboro passed away peacefully Monday, Feb. 14, 2022, at Hermitage Care and Rehabilitation Center. He was born Feb. 13, 1929, in Lansing, Kansas, to the late John F. Adams and Cecil Margaret Chacey Adams, and grew up in Stuart, Arkansas, and Meriden, Kansas, as one of ten siblings. He served in the US Marine Corps on the U.S.S. Topeka in the Pacific from September 1947 to March 1949 and was honorably discharged as a Corporal in February 1950. In 1950, he married the late Joan Kathryn Fritz in South Gate, Calif., and brought up four sons in Norwalk, California, as the owner of his own auto mechanic business. Ernie moved with his wife Joan and four boys to Owensboro in 1966, where he went into business with his brother Roy Lee Adams in an auto and boat sales and service business.

Ernie was a kind and unassuming man of the Christian faith and a great father and grandfather. He was enormously proud of his military service and was an excellent auto mechanic, having been certified as a Saab Master Technician. He looked forward each year to deer camp at the "home place" where he grew up in northeastern Arkansas, where he would make lasting memories with family and friends.

Besides his parents, Ernie was preceded in death by his wife Joan in 2012, and his son Ernest Raymond Adams in 2016, and his siblings Bettie Reno, John F. Adams Jr., Curtis Adams, Joseph Adams, and Paul Adams.

The family thanks the staff members of the Hermitage for their caring attention to our Dad in the last ten months of his life.

Funeral services will be Noon Monday, February 21, at Glenn Funeral Home and Crematory with Pastor Mickey Richardson officiating. Burial will follow in Resurrection Cemetery. Visitation will be from 4 PM until 7 PM Sunday and from 10 AM until Noon Monday at the funeral home.

Memorial contributions may be made to the Goodfellows Club, c/o Messenger-Inquirer, 1401 Frederica Street, Owensboro, KY 42301. Messages and condolences to the family can be shared at www.glenncares.com.