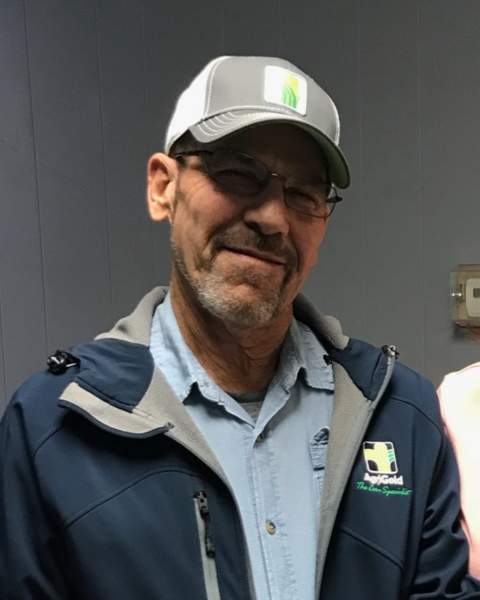 David G. Wink, 66, died peacefully at his childhood home Wednesday, September 14, 2022, surrounded by the love of his life and wife, Debbie, and his six daughters, Jesica, Melisa, Cindy, Ashley, Alex, and Casey.

David was escorted to Heaven by Saint Joseph, his confirmation saint.  There they were met by “The Great Physician, Jesus Christ.” No more sorrow, no more pain.

David was a lifetime farmer.  He often said, “The best crop I helped raise was my six farmer daughters.”  He never saw the ocean or the mountains, but he traveled all over the world through the books he read. He would rather be singing God’s praises while driving a tractor or combine, than to be in large crowds.

David was able to live two different lives. On October 21, 1991 he became a “friend of Bill W.” Thank you to all the members who shared their experience, strength, and hope.  “One day at a time.” Special thanks to Jay W, Jim W, Micky A, Cindy A, Don S, and Jamie K.

Special thanks to Rebecca and Brett; my best friend and “Uber” driver, Bub; my nephews Jonah and Ethan; Larry Wink; the Thompson Boys; my number cruncher, Vernon; and all the landlords over the years - for trusting me and letting me farm your ground.  I may not have been the best farmer, but it wasn’t for the lack of trying and effort.

“If there ain’t mud on your equipment, you ain’t trying.”- David Wink

Thank you to all the vendors who helped to keep What-A-View Farms in business.  Special thanks to Philip of Southern States.

The family would like to offer a very special thank you to Nurse Sara and the caring team of Hospice of Western Kentucky. You provided compassion, exceptional care, and tremendous dedication. “Write that down.”

“To my beloved wife, Debbie:  I’ll wait on the golden streets of Heaven... patiently.”

David was preceded in death by his parents, Charles and Melba Wink; and older brother, Charlie Pat.

David, Dad, Papaw, Uncle Dave, you will be missed.

The funeral service will be at 2:00 PM, Saturday, September 17 at Glenn Funeral Home and Crematory, where visitation will be from 10:00 AM until 2:00 PM. Private burial will be at St. Anthony Catholic Church Cemetery.

Memorial contributions may be made to the Wendell Foster Center, 815 Triplett St, Owensboro, KY 42303, where his "Kaley Girl" cares for residents, or you may wish to honor David's memory by taking a drive through the countryside and admiring God's creation.