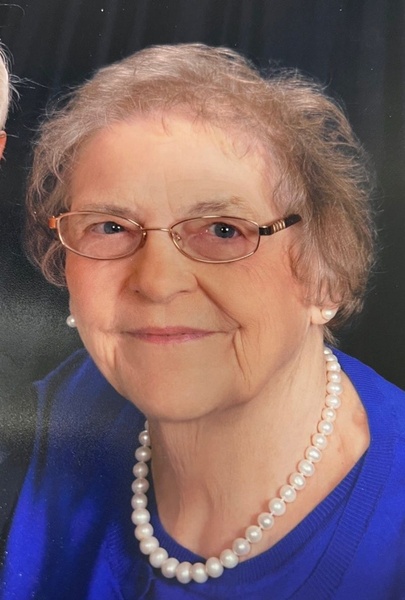 Birdie, as she was nicknamed by her Dad at a very young age, peacefully entered heaven on Wednesday, August 10, 2022. She was a special person from the beginning having been born on Valentine's Day in 1925. Born in Stoy, Illinois to Roy and Bertha Michl Wright, she was the youngest daughter in the family and a "daddy's girl".

Her wish was to be remembered as a good mom. She was in fact a great mother, always thinking of and doing things for her kids rather than worry about herself. She was a very selfless individual. Mom's many talents included the ability to make something out of nothing. Did you know that an oatmeal box or a cereal box makes wonderful Barbie doll furniture? We can tell you all about it. She was an excellent seamstress making everything from Christmas and Easter dresses, shorts, and tops in the summer and sport coats and prom and wedding dresses. Her homemade cinnamon rolls were delicious and birthdays were always a special day and included a homemade decorated birthday cake. She was creative and artistic, piecing and hand-quilting many a quilt, which were gifts to children and grandchildren as they married. Additionally, she made dolls, teddy bears, painted hundreds of Santas as well as painting landscapes. Birdie was an avid Sudoku player and if you mentioned playing dominoes, she was the first one to the kitchen table.

Birdie was a graduate of Calhoun High School where she was class Salutatorian, junior editor of the yearbook, editor of the school newspaper, and a member of the National Honor Society. She worked at General Electric during her early adulthood. For many years, she was a stay at home mom, returning to the work force when her youngest child was in school. She was employed at Premium Allied Tool until her retirement. Upon her retirement, she and husband, Pat, traveled extensively both abroad, in the United States, and Canada.

Birdie and her husband have been members of Sts. Joseph and Paul Catholic Church since 1953. She was active in the St. Vincent DePaul Society. They were recipients of the Diocese of Owensboro SOPHIA Award in 2007 and, in 2011, they received the Msgr. Braun Stewardship Award from their parish.

Family gatherings were very special to her. Some of her favorite vacations were the ones to the beach and the mountains with children, grandchildren, and great grandchildren.

Birdie's funeral Mass will be held on Tuesday, August 16th at 10 AM at Sts. Joseph and Paul Catholic Church with Father Mike Williams officiating. Burial will follow in Resurrection Cemetery. Visitation is Monday, August 15th at Glenn Funeral Home and Crematory from 4 PM until 8 PM with prayers at 6 PM. Visitation will also be held on Tuesday morning from 8:30-9:30 AM at the funeral home.

Memorial contributions made be made in Birdie's memory to the St. Vincent DePaul Society of Sts. Joseph and Paul Catholic Church, 609 E. 4th. Street, Owensboro, KY 42303 or to the Right To Life of Owensboro, P. O. Box 506, Owensboro, KY 42302. Donation envelopes will be available.